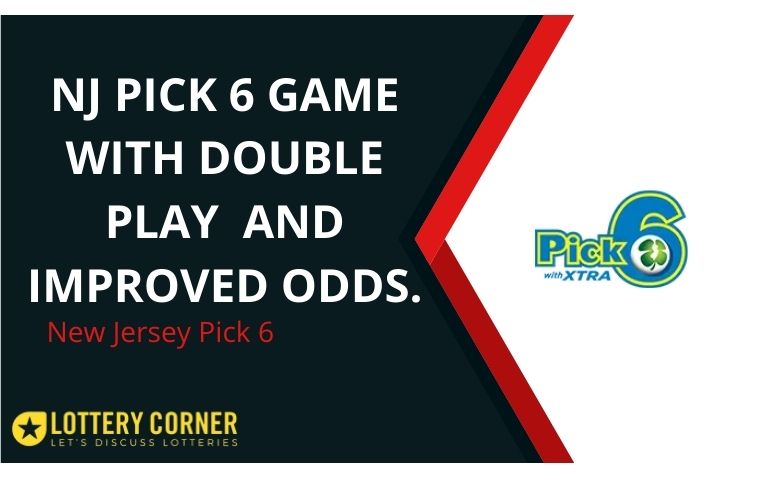 The new game will feature a prize multiplier on all tickets, increasing non-jackpot prizes up to 10 times.

A new Pick 6 game will provide better odds with a decrease in the matrix from the current 1-49 pool of numbers to 1-46 resulting in improved overall chances of winning.

as per the frequency chart

With the price increase of the new Pick 6 game, you'll be able to play the game for less money.

Players can enjoy the chance of Double Play which is a great new feature for just $1 more per game that gives players the chance to win even bigger prize.

Other big prizes in a special drawing immediately after the normal Pick 6 drawing using the same numbers and multiplier from their Pick 6 ticket.

Double Play, a game feature that gives players the opportunity for an additional chance to win a separate set of prizes from a separate Prize Pool.

For an additional $1.00, the Lottery draws a second set of numbers, giving the player a second chance of winning with the same numbers played in the base Pick-6 Lotto Play for a separate set of prizes.

Double Play Jackpot Prize – the fixed prize amount of two hundred fifty thousand dollars ($250,000) for a matching all six (6) double play number selected between 1 and 46 of the Matrix.

When a group of jackpot winners is determined, a pari-mutuel playout shall be made.

The Double Play option may be purchased for an additional $1.00, per play, or multiples thereof in the case of a Multi-Draw Wager, at the discretion of the Purchaser. The Double Play feature may not be cancelled once purchased.

Double Play Winning Numbers are drawn from the same Matrix used for each Pick-6 Lotto Drawing.

The Double Play is a unique event in Pick-6 Lotto. It occurs after each Pick-6 Lotto drawing and it pays